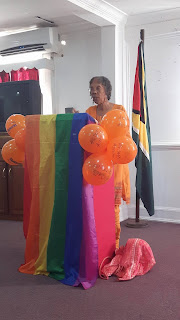 On Friday, November 25, the International Day for the Elimination of Violence Against Women, the Guyana Equality Forum (GEF) and the Society Against Sexual Orientation Discrimination (SASOD) hosted the second annual Zenita Temall Nicholson Memorial Event. The event took the form of a Public Discussion on Gender-Based Violence in Guyana and served as the commencement of SASOD’s 16 Days of Activism Campaign. The 16 Days of Activism against Gender-Based Violence Campaign is a time to galvanize action to end violence against women and girls around the world. In 2016, the campaign strongly emphasizes the need for sustainable financing for efforts to end violence against women and girls towards the fulfilment of the 2030 Agenda for Sustainable Development. The official theme for this year’s Campaign is: “Orange the World: Raise Money to End Violence against Women and Girls.”

Raising funds
The Public Discussion was facilitated by Guyanese feminist advocate and stalwart educator, Bonita Harris. She began her presentation by underscoring that “ending violence against women begins with awareness and consciousness of why the names, nouns, and pronouns we use to call and refer to persons can violate their integrity and sense of their gender identity.”
In her presentation, Harris urged participants to “talk the talk and walk the walk”. “I want to encourage everyone here to ‘walk the talk’ … Raising money to end violence against women and girls is an important action for walking the talk or as Guyanese say, putting your money where your mouth is.” She used the opportunity to launch a fundraising initiative by producing an orange bowl to be used to raise money during the 16 Days of Activism. “See this large orange bowl; I will be passing it around for a collection to galvanize action to eradicate violence against women and girls. And I will be donating the bowl for future collections. Please give generously from whatever you have in your pockets and purses today.” She also encouraged civil society organisations to forego refreshments and use that money to eliminate gender-based violence in Guyana.