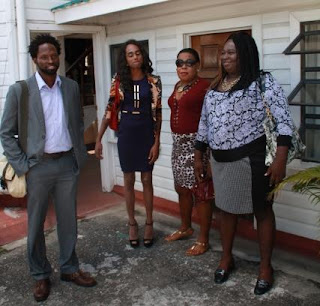 (Georgetown, Guyana) The Court of Appeal today in an oral decision delivered by the acting Chancellor, the Honourable Carl Singh, confirmed the ruling of the then acting Chief Justice Ian Chang in the High Court that the expression of one’s gender identity as a trans person is not in and of itself a crime. However, the Court of Appeal unanimously dismissed the appeal, rejecting the appellants’ arguments that the law in question discriminates based on gender and violates multiple equality provisions in the Constitution. The appellants confirmed that they intend to appeal this ruling to the Caribbean Court of Justice (CCJ).

In 2010 four trans women and one of Guyana’s lesbian, gay, bisexual and transgender (LGBT) organisations brought an action challenging the constitutionality of an 1893 colonial vagrancy law found in the Summary Jurisdiction (Offences) Act which makes it an offence for a ‘man’ or a ‘woman’ to cross-dress in public ‘for any improper purpose’. The essence of the case brought by Gulliver McEwan, Angel Clarke, Peaches Fraser and Isabella Persaud and the Society Against Sexual Orientation Discrimination (SASOD) was that this 19th century vagrancy law is hopeless vague, amounts to sex/gender discrimination because it is based on sex-role stereotyping and has a disproportionate impact on trans persons.
Read more »
By SASOD Guyana at February 28, 2017 No comments:

On Thursday, January 9, a team from the Society Against Sexual Orientation Discrimination (SASOD) met with the new Minister of Social Cohesion, Honourable Dr. George Norton, M.P. and his Technical Officer, Pamela Nauth, at his Ministry of the Presidency office.

SASOD’s Managing Director, Joel Simpson, Social Change Coordinator, Jairo Rodrigues and Advocacy and Communications Officer, Schemel Patrick attended the meeting to discuss their partnership with the Ministry of Social Cohesion and the Ministry’s public education work which is pivotal in the prevention of violence and discrimination and is at the heart of SASOD’s work with sexual and gender minorities.

Opening the meeting, Simpson outlined SASOD’s approach to social cohesion. He discussed a combination approach which give a “sandwich effect” to achieve social cohesion.  Simpson described the top-down approach which includes law and policy reform, especially constitutional reform to protect minority groups from discrimination. He stated that constitutional reform is paramount to sanction discrimination based on sexual orientation and gender identity. He then described the bottom-up approach which engages communities and educates citizens to curtail their prejudices. “SASOD believes that both approaches need to be taken together to achieve social cohesion in Guyana,” Simpson said.
Read more »
By SASOD Guyana at February 10, 2017 No comments: