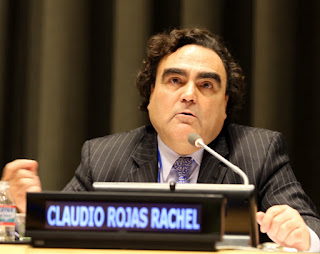 This year’s festival is set to be opened with a “Chilean Night” hosted by Ambassador H.E. Claudio Rojas Rachel, Chile’s Ambassador to Guyana. The evening’s treat will feature tasty empanadas and wine from Chile. The featured film for the evening is a Chilean movie donated by the Embassy titled “My Last Round.” The movie chronicles the intense romantic relationship between Hugo and middle-aged local boxing champion, Octavio. Unfazed by the attention he receives from women, Hugo searches for something meaningful to break up the monotony of his life. He becomes captivated with Octavio who must maintain a hard and gruff image for his fans and fellow fighters. They enter into an intense romance that would never be accepted in their small town in southern Chile. This feature tells a heartfelt story with an assured hand, eliciting complex and naturalistic performances that capture the passionate rise and tragic fall of a couple's relationship.

Email ThisBlogThis!Share to TwitterShare to FacebookShare to Pinterest
Labels: Painting the Spectrum 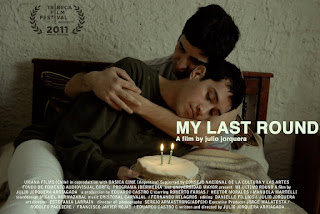 Unfazed by the attention he receives from women, Hugo searches for something meaningful to break up the monotony of his life. The young man becomes captivated with Octavio, a middle-aged local boxing champion, who must maintain a hard and gruff image for his fans and fellow fighters. When Octavio furtively acts on the subtle flirtations Hugo throws at him, he is abruptly rejected. Hugo tries to curtail his desire, but eventually surrenders to their magnetic attraction. They enter into an intense romance that would never be accepted in their small town in southern Chile. This feature tells a heartfelt story with an assured hand, eliciting complex and naturalistic performances that capture the passionate rise and tragic fall of a couple's relationship. (www.imbd.com)
To view trailer click here.
Read more »
By SASOD Guyana at May 30, 2016 1 comment: 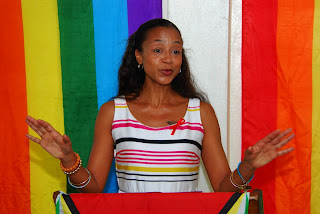 Stephanie Joseph de Goes, Guyana’s Country Coordinator for the President's Emergency Plan For AIDS Relief – PEPFAR, a United States governmental initiative to address the global HIV epidemic with her office based at the US Embassy in Georgetown, spoke on the dire need for Guyanese to come together to fight against stigma and discrimination for those living and infected by  HIV.

Her remarks made at Guyana’s 7th Annual AIDS Candlelight Memorial held at the Catholic Life Centre by the Society Against Sexual Orientation Discrimination (SASOD) Sunday last gave an uplifting charge for the future. “This year’s theme, to engage, educate, and empower, emphasizes the need for each one of us – not just people living with HIV or gender minorities –to join forces in the movement for human rights and zero discrimination. We must put an end to the disease of stigma and discrimination,” she said. “Stigma and discrimination eats at the soul of a society. We know that eliminating stigma and discrimination will positively affect a nation’s progress, well-being, and public health for things like HIV prevention, care and treatment.”
Read more »
By SASOD Guyana at May 30, 2016 No comments:

In observance of the annual International Day Against Homophobia, Transphobia and Biphobia (IDAHOT) on May 17 and commemorating Mental Health Awareness Week 2016, the Society Against Sexual Orientation Discrimination (SASOD) hosted a Lunch Talk on Mental Health and Well Being for lesbian, gay, bisexual and transgender (LGBT) Guyanese with discussions being led by Dr. Janice Jackson, Psychologist and retired University of Guyana lecturer; Leroy Adolphus, Policy and Advocacy Officer at the National Coordinating Coalition Inc (NCC); and Dr. Melissa Varswyk, Principal of Georgetown American University and Vice-Chair of Blue CAPS. The discussions were moderated by Ulelli Verbeke, Chairperson of SASOD's Board of Directors.

Guyana needs more mental health professionals
Given the scarcity of mental health professionals in Guyana which impedes access to services for LGBT people, Dr Melissa Varswyk made a call for vulnerable communities such as the LGBT Guyanese to form groups in civil society for policy and advocacy and community support like SASOD which she said can very influential in offering support for persons suffering with mental health conditions. This she said will not be easy initially but support mechanisms are essential for persons who are struggling. Dr. Varswyk expressed that there is a significant lack of trained mental health professionals in Guyana and on the policy side of things Guyana needs to focus heavily on investing in more skilled professionals such as psychiatrists and psychologists. According to the medical professional, a lot of students show interest in mental health and psychiatric specializations but Guyana does not have the human resources and necessary specialized training to fulfill the needs for these fields of study.

GCCI President Calls for Amendment of the Prevention of Discrimination Act 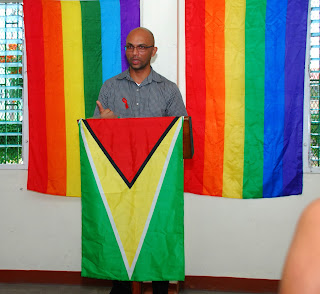 President of the Georgetown Chamber of Commerce and Industry (GCCI) Mr. Vishnu Doerga made a call for the government to amend the 1997 Prevention of Discrimination Act to include sexual orientation, gender identity and health status as grounds for non-discrimination in employment; he made this call while addressing an audience at the seventh national AIDS Candlelight Memorial Vigil hosted by the Society Against Sexual Orientation Discrimination (SASOD) Sunday evening at the Catholic Life Centre, Brickdam.

The Chamber President spoke about the importance of engaging people, communities, governments, donors and the private sector in ending the epidemic and to also support those living with the HIV virus, “We must seek to empower people living with HIV to stand up for their right to live a life free of stigma and discrimination. In this regard, it is important for us to ensure that our organisations are free from stigma and discrimination through workplace programmes for our staff.”
Read more »
By SASOD Guyana at May 17, 2016 No comments:

The International AIDS Candlelight Memorial brings together affected communities, policy makers, health professionals, religious leaders and members of the public to show solidarity and support for persons infected and affected by HIV; to encourage people to continue to act together, and to call on the public to end stigma and discrimination against people living with HIV, and key affected populations.

As President of the Georgetown Chamber of Commerce and Industry (GCCI), I fully endorse this year’s theme which is “Engage, Educate, Empower.” I do believe that it is imperative to engage people, communities, governments, donors and the private sector in ending the epidemic. The private sector has a pivotal role to play in limiting the spread of HIV. An important avenue to ensure that this happens is through workplace education. We have a responsibility to educate the current and next generation about HIV prevention, treatment and care, and how it affects our lives.