In observance of International Transgender Day of Visibility on March 31, the Guyana Trans United (GTU) and Guyana’s Society Against Sexual Orientation Discrimination (SASOD Guyana) in collaboration with the Ministry of Public Infrastructure hosted a Stakeholder Consultation on Violence and Discrimination in Access to Public Transportation for LGBTQ+ Persons at the Ministry’s Fort Street Kingston board room on Wednesday, March 27, 2019.
The aim of the consultation was to share information, facilitate dialogue and formulate solutions with regards to the standard of respect and treatment required for all persons utilizing public transportation. The meeting discussed the effects of anti-LGBTQ discrimination in accessing public transportation and regulations and solutions aimed at preventing and punishing violence and discrimination against LGBTQ+ persons seeking to utilize public transportation services.
Participating in the stakeholders consultation were representatives from the United Mini Bus Union, Ministry of Public Infrastructure, Ministry of Business, Guyana Police Force, UNAIDS, USAID Advancing Partners and Communities Project, GTU and SASOD Guyana.
In brief opening remarks, Managing Director of SASOD Guyana, Joel Simpson, noted that the goal of the consultation was to find collective solutions to prevent the violence and discrimination some LGBTQ+ persons, especially transgender persons, suffer when using public transportation. SASOD Guyana’s Human Rights Coordinator, Valini Leitch, pointed out the difficulties some LGBTQ+ persons encounter in accessing public transportation. This, she said, subsequently affects persons’ ability to access healthcare and basic needs and has been an ongoing problem, especially for transgender persons who face the brunt of the abuses simply because of their visibility.
Simpson emphasized that every citizen should be able to access public transportation without fear of violence or discrimination. The problem, he said, is not just limited to mini-buses, but cuts across the local transportation sector, including taxis and speed boats. He also noted the limitations that LGBTQ persons encounter in accessing justice while also pointing out that the Caribbean Court of Justice (CCJ) struck down Guyana’s law against crossdressing in November of last year.
The Traffic Chief, Senior Superintendent Linden Isles explained that the law is clear on the obligation to carry passengers. He recognized that cases of discrimination do occur and pointed out the importance of reporting swiftly to the police and giving a clear and detailed statement of the police when these infringements occur. SASOD Guyana’s Managing Director, Joel Simpson, noted that in some cases the traffic ranks do prejudicially take the side of the taxi driver or mini-bus operator. Simpson emphasized the need for sensitizing traffic ranks and transport operators.
Muriel Tinnis-Duke, Director of Consumer Affairs at the Ministry of Business, noted that the recently released Code of Conduct for Minibus Operators was prepared with the prevention of all forms of discrimination in mind. Recognizing gender as a prohibited category of discrimination in the Code of Conduct, Simpson noted that “sexual orientation, gender identity and gender expression” needs to be expressly included in the list of grounds in the Code’s non-discrimination provision. He expressed the need for broader consultations on future iterations of the document.
Clive Williams, Planning Officer at the Ministry of Public Infrastructure’s Central Transport Planning Unit, noted that his Ministry was in full agreement that persons should not suffer any discrimination in accessing public transportation. He emphasized the need to engage transportation bodies to have sensitization sessions. In closing, Simpson acknowledged the role of education going forward and expressed interest in further collaborations and bilateral meetings with the other stakeholders at the meeting. He also noted the need for GTU and SASOD Guyana to undertake community education so that LGBTQ+ persons can be informed of their role in the process. 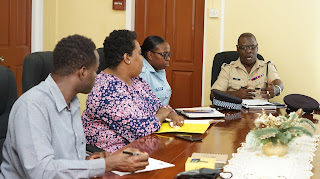 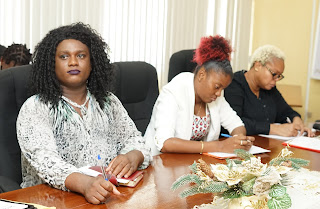 Some of the participants at the recent Stakeholder Consultation on Violence and Discrimination in Access to Public Transportation for LGBTQ+ Persons. Seated (left to right) are President of the United Mini Bus Union, Eon Andrews, Traffic Chief, Senior Superintendent Linden Isles, and Executive Director of Guyana Trans United, Q. Gulliver McEwan.
By SASOD Guyana at April 11, 2019 No comments: