and the Faculty of Law UWI  Rights Advocacy Project (U-RAP)

The Honourable Chief Justice, Mr. Ian Chang, sitting in the Constitutional Court, heard full arguments from lawyers acting on behalf of the applicants – Quincy McEwan, Seon Clarke, Joseph Fraser, Seyon Persaud and the Society Against Sexual Orientation Discrimination (SASOD) – as well as a response from the State, on Tuesday June 4, 2013. This is an important case that will help to determine the implications of the commitment made in the Guyana Constitution to “eliminating every form of discrimination.”
Attorney, Lecturer in the Faculty of Law, University of the West Indies, St Augustine and co-coordinator of the Faculty of Law UWI Rights Advocacy Project (U-RAP), Dr. Arif Bulkan, and Gino Persaud appeared for the applicants. Dr. Bulkan argued that section 153(1) of the Summary Jurisdiction (Offences) Act which criminalizes cross-dressing for an ‘improper purpose’ violates the Constitution of Guyana because it is discriminatory and vague. He argued that the cross dressing law is discriminatory on the basis of sex and gender as it seeks to criminalize persons who do not confirm with socially constructed stereotypes associated with their biological sex.
“Tuesday’s full-day court hearing is really the culmination of more than 4 years’ work between SASOD, U-RAP, Guyanese human rights attorneys and the transgender folk who suffered egregious abuses and enduring injury to their human dignity during the February 2009 police crackdowns on cross-dressing,” said SASOD’s Co-Chair, Joel Simpson. “Justice can only be served by the court declaring this insidious law unconstitutional, null and void,” Simpson concluded. The case of Quincy McEwan and others v.  Attorney General was filed on the eve of World Day of Social Justice, February 19, 2010, by SASOD and four of seven persons convicted and fined in 2009 for violating section 153(1) (xlvii) of the Summary Jurisdiction (Offences) Act, which makes it a criminal offence for men to wear female attire and for women to wear male attire in a public place for an improper purpose.
One of the litigants, Quincy McEwan, better known as Gulliver, said, “If the decision is positive, we can safely go about wearing our clothes without the police arresting us for dressing a certain way – and this case is evidence that we do face discrimination.” Another litigant, Joseph Fraser, known as Peaches, said, “There are plenty of transgenders out there who are looking for jobs; who don’t feel comfortable in male clothes, so they are discriminated against because of the way they dress – and as a result, engage in sex work to make a honest living. If the Chief Justice does not rule that this law is unconstitutional, everything will go back to square one and we will continue to be oppressed,” Peaches added.

Arguments for the Applicants
In his arguments, Dr. Arif Bulkan pointed out that the law was historically oppressive and originated from the 19th century colonial vagrancy laws, which were instituted to control the free movement and activities of ex-slaves and indentured servants in the British Caribbean, especially in urban places. This 1893 law also criminalises other activities in the city such grooming an animal in a public place; placing goods in a public way in town; beating a mat in a public way; flying a kite in the city; loitering around a shop and hauling timber in a public way. Dr. Bulkan described these as victimless offences and mechanisms of social control.
In response to questions from the bench, Dr. Bulkan focused on the fundamental constitutional principle of the rule of law, which requires that any law which interferes with your individual rights and creates a criminal offense must be formulated with as much precision as possible to allow the regular person to know in advance what is being prohibited and regulate his or her conduct. He said that this so-called offence of being dressed for an “improper purpose” is so uncertain and unclear that it violates the principles of fundamental justice. He argued that it is so vague that it gives “boundless discretion” to the police and magistrates that would be applying this law “and encourages arbitrary and capricious enforcement…” He said the definition of male and female attire is now blurred – and he asked the question: “Who determines male and female attire?” He added, “What the State has failed to prove is whether the law has any meaning.”
In closing, Dr. Bulkan said, “We reiterate our prayer that this law be declared unconstitutional.” He said the state could provide no legitimate reason for such a law and its restriction on human rights such as public order or public safety. He observed that if a crime was committed or attempted, the police had multiple offences with which they can charge persons; this one was superfluous and dangerous.

Counsel for the State
The Counsel for the State, Kamal Ramkarran, presented arguments that the courts could resolve any ambiguities in the law in section 153(1) and provide a definition of what is proper and improper conduct through the normal practices of interpretation. He also said that it is a matter for parliament to determine the appropriateness of any law. The Constitution of Guyana in Article 8 provides that the Constitution is the supreme law of Guyana, and if any other law is inconsistent with it, that other law is void to the extent of the inconsistency.
According to Dr. Rosamond King, Co-Chair of the Caribbean International Resource Network and Assistant Professor at Brooklyn College, the outcome of this case is therefore a matter of great significance – and “people around the Caribbean are watching to see whether this patently vague law will be allowed to stand.” King also said, “While some media have sensationalized this case, at its root, this case questions what the state gains from restricting individual's right to dress as they please, regardless of the reason.”    Karen De Souza, National Coordinator of Red Thread attended the court proceedings on Tuesday. She observed, “It is immoral that so much time and money has to be spent on doing what is right. That is immorality.”
The Chief Justice, upon closing the proceedings said that notices will be sent to the applicants and the State, which will provide the date on which his decision will be announced in court.


SASOD is a local human rights advocacy organisation which is committed to promoting equal rights for all Guyanese, with a focus on eliminating discrimination on the grounds of sexual orientation, gender identity and gender expression. U-RAP’s objective is to promote human rights and social justice in the Caribbean by undertaking and participating in human rights litigation in collaboration with human rights lawyers and organisations. The team of lawyers involved in this case includes Gino Persaud, Nigel Hughes and Miles Fitzpatrick, SC. 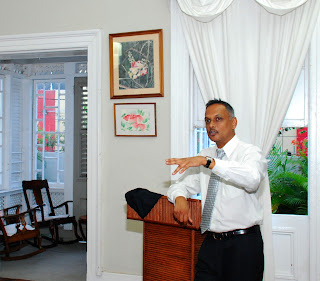 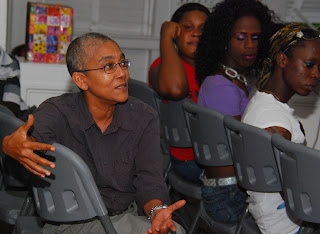 it is surely a sad day coming, USA leads the war on so many issues and everyone else follows to suite. Yet they cannot solve their crime issues. We are heading towards the day when religious leaders, righteous men, women and children will be place in prison and even killed for standing up for righteousness. Just as it was foretold by the prophets. Leviticus 18:22 still stands today. Homosexuality is a total rebellion against the Lord God.